Listen to awesome records, and figure out your life at the same time. Vinyl Tarot. A working tarot deck made of records. The cover art, artist and specific song unite, creating the coolest deck ever. Music influences our lives in so many ways. Vinyl Tarot is upfront about that influence, and perpetuates it by creating new relationships with old songs.

I have made the Major Arcana (22 Cards), and I am working on digitizing the deck with it’s own website to be launched later in 2015. I will be completing the deck (78 cards total) this year in Toronto, because I need a city with thousands of records to comb through to make this project complete. Vinyl Tarot was performed in Montreal and Toronto in October and November 2014. This October 3rd 2015 readings will be done for trades during Nuit Blanche Toronto from 10 pm -late at Grange Ave and Grange Place (in the alley). 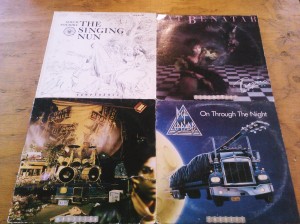 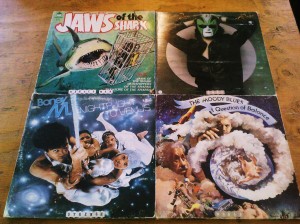 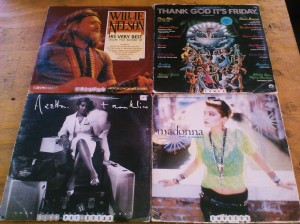 The first performance of this piece was at Dawson City’s Riverside Arts Festival. I’ve done small readings around the North with this piece, and it was in-residence at Rue Studio on Manitoulin island, Ontario, for a year. I’ve created an accompanying booklet that describes the card’s significance, and how to do a simple, 3 card/song Gestalt reading. Each reading takes about 15-20 minutes, to explain the card, and then listen to the song. I perform readings for trades or a suggested donation of $10.

For example, Billy Joel, ‘Only the Good Die Young’ is the Death card. Boney M, ‘Rasputin’ is the Strength card. Prince, ‘You Got the Look’ is the Magician. Tom Waits is Judgement, The Singing Nun is Temperance and the High Priestess is Aretha Franklin.

Check back for more news about this project!